The way my grandfather tells it he was in one of them backwaters. Small town, Louisiana, or was it Mississippi? Anyhow he was always a gambling man and so was like to as not to find himself in a dingy place like that. Dirt floor. One bare light hanging from the thread from the ceiling. Smell of cigar or cigarette smoke cling to the walls and skin and clothes. The men round the table were not wholesome men, as he tells it. All with something to prove, but worse than that, something to lose also. 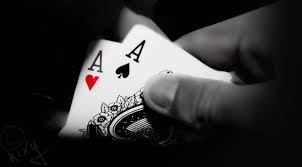 My grandfather flexed the two cards he had between his fingers. Took another sip of his bourbon. The club ace had gone down first. Then a five hearts. They only played one more. Right then he had nothing but a diamond two and spade, jack high. He had bet it all and it wasn’t the first time. Thing was my grandfather didn’t lose. Not when the stakes were that high, not when his Chevelle was on the line. He never lost because my grandfather was a cheat, a magician. He always kept cards on him. Multiple packs so he knew he’d have some to match, and right then, as he was looking down at his hand he knew if he didn’t do nothing he’d about lost his Chevelle, and he wouldn’t lose his Chevelle nohow.

I don’t know how he did it, and as far as I know, neither do them he was playing with–he never showed me his magic. But he says he switched his cards out. Squinting across the table he flicked the edges of his cards, put them face down, looked into the shadowed eyes of the other men. The other men who had just as much to lose as he.

Like my grandfather, nobody at the table had anything else to bet. This was all or nothing, and most of them got nothing. The dealer turned over the third and last card in the pool. A club queen.

There was a collective intake of breath. A letting out. I think at that point, knowing your hand, knowing what all the cards in the pool are, you know whether you’re going to win or lose. My grandfather would have lost. But when he picked up his cards he held the diamond and heart ace. He breathed in the knowing he was safe. That he had just won as much as he’d ever won.

Now I can’t pretend like I know how magic works. S’far as I tell my grandfather took a mighty gamble when he changed his cards to aces. What if another fool at the table had the same card? I still don’t know. But when they all put their cards down my grandad had win with three of a kind, ace high.

He never carried a gun. Said it only made things worse like as not, but some of the others did. When they saw his cards fury touched their eyes and they went for the metal in their belts. Way my grandad tells it he was scared for his life, but not because of them with guns. On the contrary, I don’t believe my grandad’s ever feared death. But Jarvin Mackerel was the name of the man directly across from my gramps. Jarvin never carried no gun, just like him. He never carried no gun ‘cause he didn’t need to. When Jarvin Mackerel he raised hands to those who were reaching for metal.