It’s been months since I’ve posted any news. But for those at all interested, I’m alive and well. I believe I am nearing the time at which I will be more consistent with my blogging, as it is something I enjoy greatly, though once I return I am afraid it will probably be a weekly practice rather than daily. I simply have other obligations.

For this entry, I’d like to share a breakdown of a short story I read just yesterday. This kind of breakdown is something that was introduced to me by one of the faculty in my MFA program, and if this feels a little too MFA-ish than it’s probably because it is. For those who enjoy dissecting fiction, for those who seek to understand why it works, and why it is or is not fulfilling, read on.

I’ll start with this graphic I created (I apologize for the resolution): 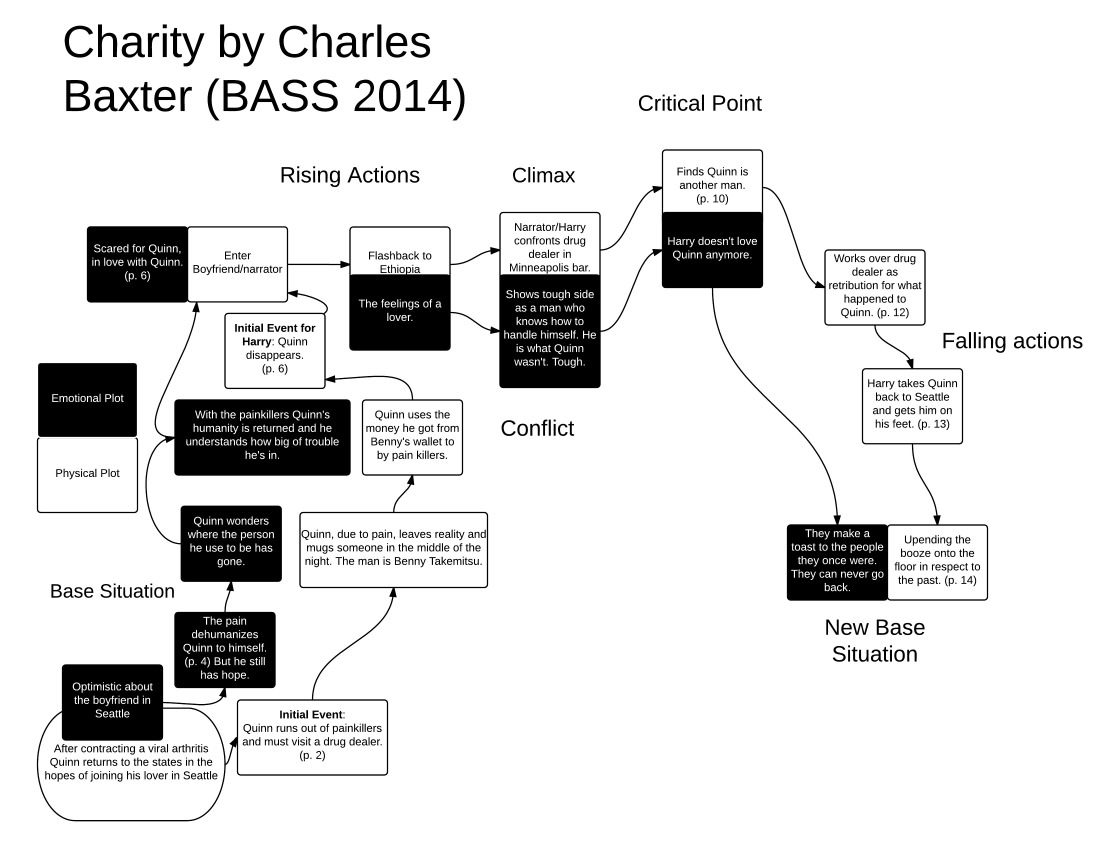 The story starts with Quinn newly arrived in the United States after some time spent in Ethiopia. While he was squeaky clean before he picked up some type of contagious arthritis, and though he’s in some trouble now, he still thinks he’ll find his way out. That’s where he is physically. Emotionally, he’s optimistic about his boyfriend whom he met while abroad. They are separated by distance.

This puts the story in full motion–sure you could argue that the inciting incident is Quinn’s contraction of the arthritis, but that’s summed up so quickly in the piece, I don’t see the story starting until he runs out of painkillers and has to visit a drug dealer in a shady bar.

The visit to the drug dealer spawns conflict, as Quinn doesn’t have money enough to pay for the painkillers he needs to feel human. As a result of this he mugs someone in the middle of the night. Once he takes the painkillers Quinn understands how much shit he’s in.

And this is where the whole story goes sideways–the reader hasn’t actually been in Quinn’s PoV at all. We’ve been listening to someone named Harry tell the story of what he’s been able to put together of what happened to Quinn. Oh, and Harry is Quinn’s boyfriend. So Suddenly the reader takes a step back and there is another. . .

. . . but this time the inciting incident spurs Harry on within the story, because quite suddenly, Quinn disappears.

Now, I think this is what makes this story tick. Both Harry and Quinn feel like very real, very complex humans because we see an inciting incident for both of them, which makes readers think about inciting incidents for everyone in a fictional world. Stories are happening everywhere and this piece hints that inciting incidents aren’t isolated. The whole world is ruled by cause and effect.

S0. When Quinn disappears Harry takes up the story in his attempts to find his beloved. We get a scene of Quinn when he was well, and why Harry falls in love with him–important backstory. Because we’ve already seen Quinn fall, this flashback is in place of the rising action of the story. It builds tension like few backstories I’ve ever seen, because we feel and see the love Harry has for Quinn and we want Quinn to be okay.

In response to Quinn’s Disappearance Harry goes and confronts the drug dealer that Quinn had gone to see. It’s a tense moment because we don’t know how the drug dealer will take to a gay man asking questions–but in due course we find that Harry is pretty bad ass.

Following the drug dealers tip, Harry finds Quinn completely out of his mind near the river. This is a critical moment because it is in this moment that Harry realizes that Quinn is a different person than the one he fell in love with. He wishes Quinn was his old self, but he suspects that’s impossible.

Harry returns to the drug dealer and beats the him up for what he had done to Quinn–getting him addicted to painkillers. Then Harry takes Quinn to Seattle and gets him on his feat. At this moment readers wonder if Harry can learn to love the real Quinn; the one that exists now.

Quinn attends meetings for addiction. He and Harry talk all the time. Harry has Quinn over for dinner and Quinn says some things that make Harry realize that Quinn doesn’t believe he’ll ever be good or whole again. There’s no “recovered” from something like this just “recovering” forever.

Quinn brings it full circle by invoking an Ethiopian toast, by upending a drink on the floor. Harry does the same–the toast is one that is given to signify leaving the past behind. For the two characters here, it signifies leaving their old selves behind–and once and for all, Harry understands he can’t ever go back to loving Quinn.

That’s my breakdown of this story–if you are interested in reading it you can find it in The Best American Short Stories 2014, edited by Jennifer Egan. It’s full of great stories, and a couple duds, but what collections aren’t? If you have anything to add, please, leave a comment and I’ll respond promptly.