I first saw Oblivion Song on a shelf when I was living in Olympia. The local comic shop had it in the “new” slot and the art immediately caught my attention. I asked the owner of the shop about it and he wasn’t really into it. That being said, it was only the first issue or such. As much as I was drawn to the art, I put it on the backburner of my to-read comic list. Now that the first volume, or “Chapter One” is out, here’s a breakdown.

(WARNING: SOME MINOR SPOILERS AHEAD)

Premise: Philadelphia is a totally underutilized city in fiction. I just want to put that out there. That’s where this takes place. A future Philadelphia, but something has happened. They call it the “Transference.” Ten years ago a substantial portion of Philadelphia was

sucked into another dimension. Some of that other dimension was also transplanted into Philadelphia. Nobody knows why. With this other dimension comes strange fungal growths, scary carnivorous monsters, and families ripped apart. Some years back there was an effort by the government to transport teams into this other dimension, a dimension they call Oblivion, and try to find the people who might be lost there. They develop a dart that, when struck with it, will realign your molecules and send you back to the human plane. But after 10 years, the government has cut funding and only a few people continue to research what Oblivion is, and only one person is brave enough to enter it in an attempt to rescue people who have managed to survive.

Chatacters: There is a three-person team that still works on saving people from Oblivion. First, is Nathan. He’s the only person who still enters Oblivion. Years ago he rescued Duncan, a scientist who spent years in Oblivion just surviving on instinct. His wife, Bridget, is also a scientist. This is the immediate cast, but it grows quickly. It’s established early that each person has their own struggle. Nathan has lost someone in Oblivion–his brother, Edward. This fuels his obsession. Duncan has PTSD from years spent in Oblivion and often lashes out at people who interrupt him when he is deep in thought. More often than not, this ends up being Bridget, his wife. Of course, this creates a lot of fear and tension between Duncan and Bridget, especially because Duncan refuses to get psychological help. Bridget, before Duncan’s return, had 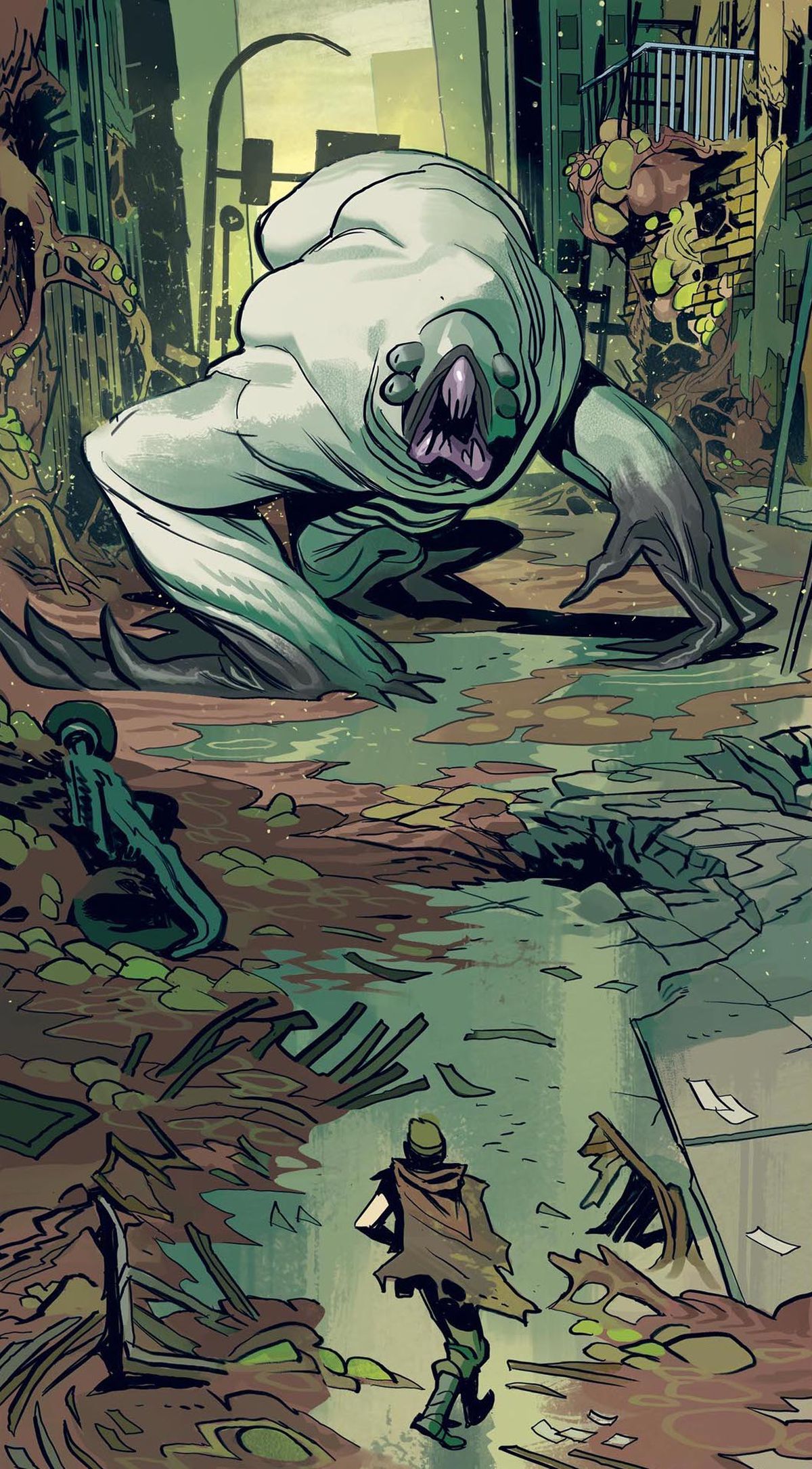 been involved with another man. When she tries to call it off with Benjamin over dinner, he asks if she has told Duncan about the two years Benjamin and she were together. She hasn’t, and later its revealed that she was out late that night, perhaps carrying on the affair. Then there is Heather, Nathan’s girlfriend–but she works for the government and the same department that refuses to give Nathan funding for the rescue effort. There is tension between them because she doesn’t want Nathan to die in Oblivion, she calls out his obsession often and Nathan doesn’t respond well to that.

Art: Like I mentioned earlier, the art was the thing that first caught my attention. Lorenzo De Felici is a legendary Italian cartoonist, apparently. I don’t know what else he’s done, being new to comics, but I like his style a lot. It’s cartoonish without feeling childish. He splices hard, thick lines on close-ups that really show the wear and tear in characters’ faces while keeping the more retracted panels clean and simple. He also uses straight lines for darkness and shadow in an effective manner to illustrate the tension between characters.

Conclusion: By the end of Chapter One (#1-6) I really just wanted more. The ending is a real “Ow shit” moment, one that really threw in a bunch of intrigues. Furthermore, one of the most skillful aspects of this piece is how every single character has their own struggle, and by the end of the Chapter, every person’s struggle has gotten more intense. This is a quality comic that I thoroughly look forward to as it develops.