When she arrived home there was nobody there. She parked her Four Runner in the garage and lowered the door. The door that lead into the kitchen through the garage door was unlocked. As she pulled it shut behind her, she turned the little nub.

She was just amazed Claudia could have been related to such a creep! Drugs, thieving–maybe Danny had actually killed people. The thought upset her. She walked to the front door and made sure it was locked. Then the sliding glass door that lead out onto the deck yard. Also locked. In the right hand corner of the backyard was the shed. It was full of gardening tools and home repair stuff. A ladder was lying on its side just lying there. Anyone could steal it. Anyone could just grab it and walked away in the middle of the night and sell it for drug money!

Margaret put down her purse on the kitchen table, then thought better of it and picked it up. What if someone broke and took it? She brought it into Gordon’s office with her and set it on his desk. She booted up the computer and sat back in the leather desk chair. Outside a car door slammed. A dog barked. Maybe they should get a dog. Ava would love it and it could keep people like Danny away. Margaret jumped as the computer made out a loud beep! The internal fan started to whir. She heard a lawnmower start up. The house creaked. It was an uncomfortable sound and she held her breath for a moment. It creaked again. Margaret leapt to her feet, clutching her handbag. She walked to the office door and peered out into the living room.

She thought back to the first time her parents had left her home alone.

“And if you cook anything don’t leave the kitchen with the stove on,” said her mother.

Outside it was dark and every window was a black mirror that showed a darker house than the one Margaret was in.

“And if anything goes wrong you can call the restaurant,” Daddy said.

“I know,” whined Margaret. They had told her all of this before. She was 13 years old and Debby Shrumpt and Ryan Fingel had already been left home alone a dozen times–and they were both months younger than her. She could handle an evening by herself. She’d reassured her parents over and over–and did they ever believe her?

Again, hadn’t Daddy said all this time and again–really? Time and again. She swore, her parents treated her like a piece of drywall. As if their words just bounced right off her and she was completely incapable sitting around and watching the tv for a whole evening by herself.

Why would they put that story at the back of the book? He flipped to page 137. The binding was stiff, as though the book hadn’t ever been opened.

Doug hadn’t ever read the story. He reached in and brought out the money he had left.

He looked at it. He flipped back to the cover and read the price on the inside. $5.50.

He needed a shower which would cast another three at the YMCA. He went toward the counter and put a ten dollar bill on the counter with the book. Dickhead at the counter wrinkled his nose as if Doug had a horribly unsavory smell–he probably did, but he also probably smelled a lot better than when he had been wearing his other clothes. The clothes that were now swirling in the machine.

Dickhead didn’t speak or make any kind of acknowledgment that Doug had.

“Uh, you got a bookmark?” asked Doug, because he wanted Dickhead to acknowledge him.

The guy grabbed something from behind the counter and tossed it down for Doug.

“Thank you so much,” said Doug, ironically.

The guy with a knitted brow nodded without a smile.

Doug left and crossed the street over to the laundromat. Someone else was there now. A woman by the look of her thin shoulders–her back was turned. She was scooping clothes into a washer. Doug took a seat on a chair by the door. The smell of wet and dry and detergent was all around him. He opened the book to What We Talk about when We Talk about Love, smoothed out the spine, stretching it so the pages would lay flat and read–My friend Mel McGinnis was talking. Mel McGinnis is a cardiologist, and sometimes that gives him the right. Before words jarred him out of his revery.

“Hey, what are you reading?”

Doug looked up. It was the girl. The one he’d seen early that morning near the fake grass at the new towering apartments. Now that he actually looked at her, Doug wondered how he’d ever mistaken her for a young man. Her shoulders were too narrow, her hips too wide, her bare arms protruding from her short sleeves too smooth and milky.

Doug held up the book.

Doug raised his eyebrows. “Me either,” he said, pointedly.

The woosh-woosh of the machines washing was all the existed for a moment. The smell of detergent painfully obvious to Doug–a reminded of how he didn’t smell clean.

“I saw you in front of my apartment,” said the girl. “Tugging on the fake grass.”

“Were you hung over?” she asked.

“Where do you sleep?” asked the girl

Doug looked up at here. That short, mousy hair, all messed around like she’d just gotten out of bed.

“Are you a student at the university?” asked Doug. 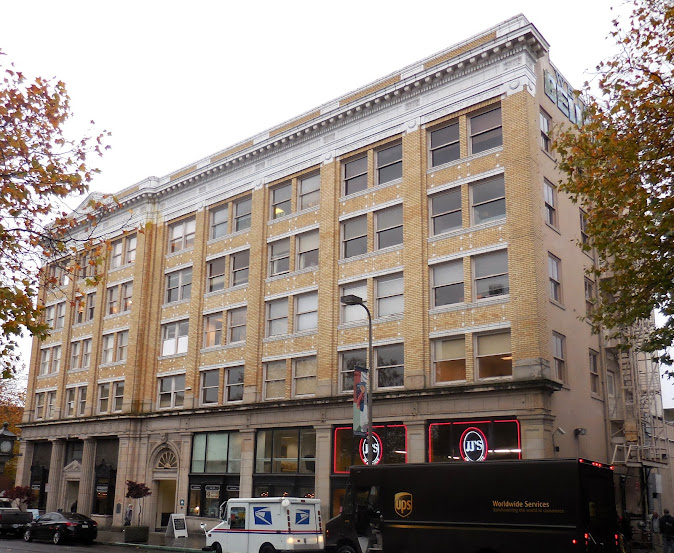 First he needed to make change. He stepped into J.J.’s, the small convenience store on Holly, and feeling as though he could buy the whole shop picked out a wrapped sandwich and a soda, Sprite. He paid $6.99 before leaving. Then his eyes fell on the cigarettes behind the guy at the counter.

He paid a total of $10.26 for them and the guy handed Doug his change. It looked a lot smaller on this side of $40 dollars. Doug took a book of the complementary matches before leaving.

Outside the rain was still coming down, but with little conviction. As though it didn’t have the heart to touch the ground. The moisture swirled in the air, a misty that clung to anything it could other than the pavement. Doug unwrapped his cigarettes, fitted one between his lips, and struck a match. It had been a long time since he’d had a smoke. He didn’t have the money often, so when he inhaled his lungs tightened and constricted as though he’d not taken a breath at all. He coughed quietly, not wanting the man passing to see him coughing over a cigarette. The second drag was easier. And it was all better from there.

After he finished his smoke he walked down Holly and turned down cornwall, his garbage bag bumping him in the legs as he walked. The laundromat was empty. Nobody was there, which was strange for a Sunday, Doug supposed. But it worked well for him. He loaded his clothes into a washer, but pulled his shorts free of the pile. He stood at the back of the laundromat, in the corner, partially shielding himself from the window and door and stripped off the pants and tattered underwear he was wearing, then slipped the shorts on. He hadn’t worn the shorts for ages, he might washed them since he’d worn them last and he wanted to have everything he was wearing cleaned as well. The shirt and sweater he had on–exceptions–other things needed to be washed more.

He paid $2 for a box of detergent from the vending machine, tossed it in the washer unceremoniously. Then he put $3 dollars into the slot, which gobbled it up. He set it to hot/warm cycle, then sat down in one of the chairs near the front window, cracked his Sprite open and unwrapped his sandwich. It was dry, and so he had to take a sip of soda after each bite. The meat didn’t taste real, it was too light on the mayonnaise, and there was no mustard on it at all. The lettuce was wilted. Still, he ate the whole thing because he was hungry, and drank all the Sprite. He threw his garbage away.

The timer on his wash was–maybe–a quarter of the way done. Doug wadded up his plastic bag and stuck it in his pocket. It made an awkward bulge there. He left the laundromat and walked across the street. The rain had intensified now and in his shorts and wool sweater he felt ridiculous. On the other side of the street was the used bookstore, Craig’s. Doug had tried to go to Craig’s before, but they were inexplicable open on Sundays but not on Mondays, Wednesdays, or Fridays. This did not strike Doug as a sustainable business model.