“Are you hungry. Andy? Breakfast?” Brent was off the phone now. Brent stood behind the couch that faced the TV.

Tyler looked at the TV. The camera zoomed in on a speck falling from one of the smoking building.

Oh, Dear God. People. People are, the woman speaking on the TV stuttered then said, People are jumping from the building. People are flinging themselves from the broken wreckage. This is–this is unprecedented. This is—

Tyler heard a cough. He turned and looked up into Brent’s face. The man wasn’t crying. No, this time the look on his face was much worse. it was stretched and thin and pale. He looked like Tyler had felt that time he’d gotten real sick and thrown up all over the desk at school. Dad was shaking his head.

“What about the news? What about Alison. What–what—”

Now it look as though another explosion has hit the second building, said the TV. 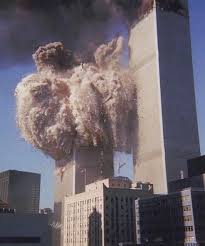 They all looked at it.

It looks as though something has fallen off the second building. We have Dan Rutherford there, on the ground. Dan, can you tell us what you’re seeing?

On the TV smoke was billowing up. shot into the air slightly, but mostly it spread out, swallowing up other buildings in its path.

The woman’s voice. It collapsed? The whole building?

Yes, thank you, Dan, said the woman. It looks as though Tower Two has collapsed. These are just incredible images, incredible.

Dad crossed in front of Tyler and sat down on the couch. Brent did the same. Tyler looked at them. Brent with his wide shoulders and cropped hair, dad in his long coat with short, scratchy hair on his cheeks and chin. Both men looked drawn and pale and at a loss for what to do.

“Tyler, come here,” said Dad. Tyler went and Dad wrapped his arms around him and help him close. “Everything will be alright,” he said into Tyler’s ear.

Tyler wasn’t sure what they were talking about. The news report continued to roll. No new information. No new footage. All anybody knew was that The United States of America were under attack.

“You’ll get to tell her,” said Brent.

“You’ll get to tell her,” Brent repeated. There was a finality to his voice.

Dad nodded. Tyler looked at him. His father’s eyes were far and away. In a time and place Tyler didn’t know or remember.

When she arrived home there was nobody there. She parked her Four Runner in the garage and lowered the door. The door that lead into the kitchen through the garage door was unlocked. As she pulled it shut behind her, she turned the little nub.

She was just amazed Claudia could have been related to such a creep! Drugs, thieving–maybe Danny had actually killed people. The thought upset her. She walked to the front door and made sure it was locked. Then the sliding glass door that lead out onto the deck yard. Also locked. In the right hand corner of the backyard was the shed. It was full of gardening tools and home repair stuff. A ladder was lying on its side just lying there. Anyone could steal it. Anyone could just grab it and walked away in the middle of the night and sell it for drug money!

Margaret put down her purse on the kitchen table, then thought better of it and picked it up. What if someone broke and took it? She brought it into Gordon’s office with her and set it on his desk. She booted up the computer and sat back in the leather desk chair. Outside a car door slammed. A dog barked. Maybe they should get a dog. Ava would love it and it could keep people like Danny away. Margaret jumped as the computer made out a loud beep! The internal fan started to whir. She heard a lawnmower start up. The house creaked. It was an uncomfortable sound and she held her breath for a moment. It creaked again. Margaret leapt to her feet, clutching her handbag. She walked to the office door and peered out into the living room.

She thought back to the first time her parents had left her home alone.

“And if you cook anything don’t leave the kitchen with the stove on,” said her mother.

Outside it was dark and every window was a black mirror that showed a darker house than the one Margaret was in.

“And if anything goes wrong you can call the restaurant,” Daddy said.

“I know,” whined Margaret. They had told her all of this before. She was 13 years old and Debby Shrumpt and Ryan Fingel had already been left home alone a dozen times–and they were both months younger than her. She could handle an evening by herself. She’d reassured her parents over and over–and did they ever believe her?

Again, hadn’t Daddy said all this time and again–really? Time and again. She swore, her parents treated her like a piece of drywall. As if their words just bounced right off her and she was completely incapable sitting around and watching the tv for a whole evening by herself.