The first arc of Shadow Roads, published by Oni Press and written by Cullen Bunn and Brian Hurtt, has come to a close. It’s been a nice ride and the comic will return in 2019.

The story revolves around two worlds. An American western world and a supernatural Native American world. Years back, a shaman devoured the flesh of a demon and became one himself. A collection of characters band together to try and put an end to this monster. It’s a pretty simple story. However, the magic that propels the story is intriguing and for an introductory arc, it’s well put together. in #5, the final showdown ensues, but the outcome raises more questions about the nature of this world and characters than it answers.

Check out the full review on Sequential Planet!

Last night I finally got through Blackwing, a gritty grimdark fantasy about a doomed and torn city caught in the midst of a war between two factions of undying wizards. Or gods. or demons. You know what, I don’t know what they are, but one faction is called The Nameless (even though they all seem to have names) and the other faction is called The Deep Kings, though what they are kings of and why isn’t quite clear. There’s no map in the book, so getting a sense of direction is difficult for readers–which I think is the point, as 80 years ago Nall’s Engine was activated and it destroyed one of The Deep Kings, as well as his army, as well as the land it rained destruction down on. But that’s not all–Nall’s Engine also broke the sky, carved slits into the fabric of reality, and now the sky wails and whines and screams at odd moments. They call the place where the sky was opened up: The Misery. It’s an apt name–everything and everyone in this book is miserable. It’s a fantastic piece of pessimistic fiction–at least until the very end.

The main character Ryhalt Galharrow (awesome name) in a mercenary known for taking any job, as long as the price is right. When he discovers a couple of dead sympathizers in The Misery with blood running down their cheeks from their eyes, he knows it’s a Darling that has killed him. Then the tattoo of the raven on Galharrow’s arm begins to burn and squirm and it bursts from his arm, a live raven, in a shower of gore. When the raven speaks (of course it does) it is the voice of one of The Nameless–Crowfoot. Crowfoot gives him a mission he dare not refuse. That’s the first chapter.

The whole piece is in first person PoV, which works to make the world ultra real. Galharrow is likable in the way where you admire him but wouldn’t really want to know him because, well, he’s a bit of a dick and he doesn’t mind doing bad things for the right reasons.

The plot takes lots of twists and turns and it’s fun learning about how magic works in this world. It’s not like anything I’ve ever read before–there are matchlock guns, then a thing called Battle Spinners who use light from coiled batteries they use to blow stuff up. Then there are the wizards who have magic that isn’t explained at all because Galharrow doesn’t understand it either.

The book weighs in at 380 pages, short for a fantasy novel, yet near the end of the book I found the book was a bit lagging and thought the conclusion could have come a bit sooner–not by much, but just a little. In the last 100 pages, I think there was a 20-page span or so in which little happened that was essential to the plot or character development.

Otherwise, this is a really great debut novel of dark and gritty fiction. It’s awesome for anyone who is tired of traditional heroes and dark lords and the like in fantasy. For me–I need to take a break from magic and read something a little more literary.

Next up on Big Ideas is Vurt by Jeff Noon, an essential and classic cyberpunk tour de force. See you next time.

First off, some background about this story. It was written because one of his fans in Belgium wanted a story by Mr. Hughes, that the fan could then commissioned to be illustrated and bound for his private collection.

A Note On Patronage:

This is awesome. More people who love fiction and love a specific writer should do this same thing. So many masterpieces have been created because of patronage. It’s what drove the Italian Renaissance, as well as many other great painters, scultors, writers, et al. This is awesome. 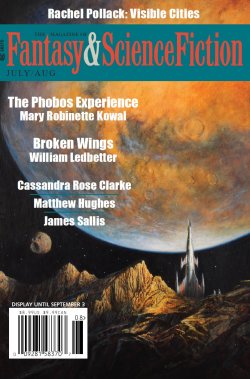 As a young boy Alphronz discovers that if he goes out into the streets and cries people will give him money. Begins to swindle people of their hard earned cash in this way until he realizes he has become too old. He then begins to set up elaborate and laborious cons that strip wealthy people of their money by offering them fake, high stake investments. But when he tries a new con, one that he can only do with the help of a wizard, his ambitions grow far too large.

Alphronz is clever and interesting and insightful. Despite his con man profession, he is still rather endearing due to the fact that he understands what drives people to make foolish decisions with their money. Often it is pain, other times it is fear. People will pay almost anything to make pain and/or fear to go away.

The world is an intriguing one, which I think is the best you can hope for in a short piece like this. I thought the world building was quite good and the magic that was being thrown around didn’t need to be explained because Alphronz never understands it either.

A fun read for anyone who likes con man stories. It also does double duty for people who like magical worlds in which there isn’t really a bad guy, but nor is there a good guy. (C+)