Yesterday I posted PART 1, of this review. If you haven’t read that, this might feel incomplete. I Encourage you to go read it first before reading this post.

Art: First, I want to touch on art because I didn’t mention it at all in my first review.

The art of this piece is weird and often cheesy. At times it reminds me of B-horror flicks, which, once I think about it, this whole story and comic feel like, by premise and artwork only. The people are simply drawn, there just aren’t many lines used to define different character’s faces and expressions. What dictates the differences between the characters is mostly head shape, nose and eye shape, hair style, and skin tone. Some of the younger characters look exactly the same, but with different hairstyles and colors–that’s really their only defining characteristic. From what I’ve heard from a few commenters on Reddit, this series is pretty polarizing. Part of it will certainly be the content, the other might be the art. It is often gruesome, the whole thing is has a pale light brightness to it, as though the light is being dispersed through glass–which it sorta is because of the dome that traps all these people. While the art of this piece does not strike me as beautiful, it does strike me as effective and is able to tell the story the creators wanted to tell.

Conflicts: There are so many conflicts in this story and all of them stem from the many characters. Whether it’s the young man whose parents both die at the hands of the “girls” causing a burning hatred in him, to Nancy’s fear of the “girls,” and her inability to trust any of the men, causing her to castrate a man while he is in bed. The conflicts run deep in every character, and while many of them seem products of the extreme environment these characters are placed in, as Kenney says when he finally stands up to his wife, “This goes back before the girls even showed up. . .they just shined a light on our 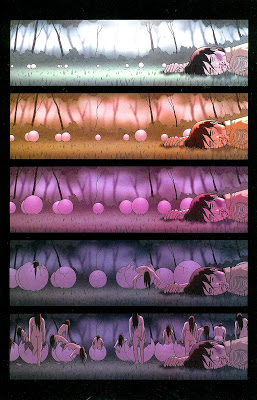 problems, Nancy, they didn’t cause them. . .” This is story telling at its best. A plot that reveals the everyday struggles of normal people. Kenney has done everything to make his wife happy, but in doing so he has become so completely passive that Nancy no longer has any respect for him, and it has driven Kenney mad. Like, homicidally mad.

While this was one of the most compelling conflicts to me, there are probably a dozen others that will catch the interest of other readers.

Climax and Conclusion: I never mentioned the giant sperm thing–which is actually what the people in the comic call it. And it’s exactly what it sounds like. Somehow, this giant sperm thing has landed in a cornfield. As the “girls” kill people, they take the bodies of the women they kill and feed them to the sperm thing, which sucks them up into its tail and then into its center, where they explode. What its purpose isn’t isn’t clear until the end. Throughout series, the sperm thing gets larger and larger, until the people of Pennystown device a plan to kill all the “girls” and then blow up the sperm thing with dynamite. While that all comes off pretty well, it’s not clear if the dynamite explosion and the withering of the sperm thing are actually related, as the sperm thing also sends out a burst of energy toward the sky and into space, just before it shrivels and dies. Whatever the reason, however, the dome is lifted and the people of Pennystown are freed. While everyone has lost someone, some people have found new meaning in their relationships with each other, which is uplifting, even in the face of tragedy.

All in all, this has been one of the most enjoyable experiences I have ever had reading a comic. As Reddit user, tryintofly, mentioned, “I’ve always thought this was one of the best series in comics, ever. I’m shocked it doesn’t appear on more all-time best lists.” Me too. As someone who is new to comics, I had never heard of Girls and just stumbled upon it while looking for Comixology Unlimited complete series. A fantastic piece of literature that shouldn’t be taken lightly. 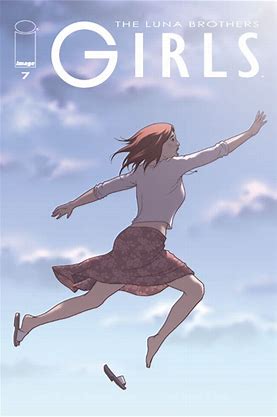 I have some concerns about the actions of my characters while making love. How do you write a convincing sex scene? I think David Guterson does a great job in “Snow Falling on Cedars,” but I can’t just copy his. I need to make it my own. What are some techniques you’ve used for tasteful and convincing sex scenes?