Finally, it is good to be back in one of my favorite comics. Wasted Space returns with a brand new arc, a new direction, and some fresh ideas that make this new installment a joy to read. It even offers some awesome, mind-bending paneling that really takes advantage of the comic medium.

We last left Billy Bane and his crew as they set off to destroy “The Creator.” Another way to put this is God. They’re looking to kill God. I do apologize if that offends anyone; it’s just what the story is about. Now, the plot jumps around a little bit in this issue, skipping here and there and months at a time, but much of it is character-driven.  We get to see the social consequences of the actions taken in #10. The result is a different kind of reading experience than any of the previous issues. This is all going on while Billy and his crew try to fly through “The Slip.” It’s all mysterious but makes for good reading and I can’t wait to see what happens next.

Read my full review at Sequentialplanet.com

Wasted Space is one of my most anticipated comics. I heard about it through Twitter (when I still had Twitter), and had multiple conversations with the author, Mike Moreci, on that medium. However, after picking up the first issue from my local comic shop, I had a difficult time tracking down the subsequent issues as Vault Comics is very small, as was my local comic shop. But I finally got my hands on #2 and #3, and while I think more have come out since I picked these up, here’s a review of #2.

Hardcopy Floppies: So, I’ve had this issue for quite some time. I don’t know why it took me so long to get to, but I picked up quite a few comics at the same time as this one, and I’ve neglected reading them. After reading this issue, however, I think I know why. I don’t really like floppies. I don’t really like volumes either–though I will probably start a collection of volumes of my absolute favorite comics, if not complete series collections. For whatever reason, I much rather read comics on my tablet. The convenience and immersion of the guided view option in Comixology are really amazing and I find myself completely sucked into the world and story more so than when I have the hardcopy floppy. So, that’s why it’s taken me some time to get into this.

Premise Revealed: The first issue of this comic didn’t reveal a whole lot on the premise besides introducing the main characters. First up is Billy Bean, who used to be some kind of spiritual leader, until he backed the wrong politician and the whole galaxy or universe, or whatever, got super pissed at him. So pissed he had to disappear, drop off the map, change his appearance with technological augmentations. Thing is, he also keeps hearing the voice of The Creator. Now, though, he just ignores those voice and visions. Molly Sue, on the other hand, claims to be the visions. If Billy Bean is the voice, she has the eyes. She can read people’s futures. She finds Billy in order to save the republic or empire or whatever this galactic civilization is. But there’s a problem. Of course, there’s a problem.

Conflict: While much of this issue is character background–mainly Molly Sue’s, we also get a look at Molly Sue’s brother, the leader of an anarchist syndicate that wants to kill the ruler, Devolous Yam. Yeah, silly name. But apparently, he’s a really bad guy. So, how does Molly Sue’s brother want to deal with Devolous Yam? Well, he has a nuclear warhead he’s going to detonate in a city if nobody assassinates the ruled. At the same time, some weird alien creature from a different plane of existence has come through a portal and is killing anyone who gets in its way as it searches for Billy Bean. While nothing has come to a head quite yet, everything is ramping up quickly. 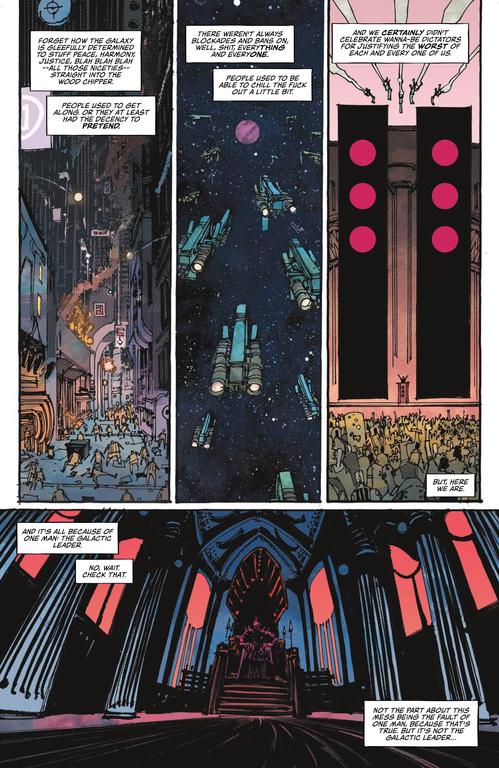 Characters: I like the pessimism in this piece. Billy Bean is over it. He convinced that he’s crazy, and maybe he is. The fact that he followed The Creators word in backing Yam which then gave way to intergalactic warfare is proof to him that he is insane. He’s got a lot of layers he isn’t revealing because of this–even if he does let on here and there, only to change his mind after the fact. Molly Sue is the complete opposite. Her gift from The Creator has made her certain she is sane and special. She has an overwhelming belief that she can, with Billy’s help, change the galaxy for the better.

Art: As I said in my review of issue 1, I think the artwork is apt and effective, but I also think it can be off-putting. The whole thing is drawn with extremely thick black lines, hard lines, that make things seem confusing and harsh at times. I think this is to the pieces benefit because that’s the world Billy lives in. Readers get a sense of how Billy experiences the world. It’s hard, it’s unforgiving. And it’s confusing.

Conclusion: I really like the premise and the world this story takes place in. While I have a floppy of issue 3, I’ll probably pick up any subsequent issues as digital, as I just enjoy reading them on my tablet more. Overall, a nice second issue that builds up the tension.