I’m stuck in a place in my script. I have all my players in a place. I have cause for each of them and tension between many. Despite all this, I find myself unable to write the conflict that feels natural and earned. The powers involved in this conflict are magical and, perhaps, divine, though that depends on who you ask.

The issue I’m running into is that, with 5 distinct characters in this scene/conflict, it is difficult to give them all enough page space to feel invaluable to the conflict. The question I keep coming back to, as I write and rewrite the scene in different ways, is this: why does this character (each character) need to be in this specific scene? How is their participation in this conflict essential to how the conflict concludes?

Like so often happens when I find myself in this situation, I turn to a technique that is both painful and, at times, feels futile: I try to write my way through it. This means I write and rewrite the scene every day until something just feels right. How do I know when I’ve got it? I’m not sure, but I know I do. This has happened with short stories before. I dealt with by writing the scene over and over again. At first, I’d write the same scene, changing nothing but the words I used–all the character actions were the same. But slowly, with the passing of the days and the rewriting of the scene, it would slowly start to change. The characters would do something just a little different. Their motivations would become more clear. Their essential natures to the scene would find their way to me.

Doing this same thing with a script, picturing the visual medium, is quite different. I can’t dive within the characters thoughts in the same way prose can. This, I find, is the constraint of the comic form. Prose has its own constraint.

But here I go again. Maybe today is the day I find clarity in this scene. Come one, characters! I created you. Now tell me where we go from her.

There was nothing he could do, he didn’t think. He turned away from the shattered window and froze. He was looking at desk, at the central monitor. The searing pain had dashed all thoughts from his mind. Now it came back to him. Now he remembered why the pain had taken him. Why it burned his nerves and threatened to burst his fingers. Why there was a taste of copper, of blood slicking his mouth.

He walked over to the desk. The central monitor had knocked over a half full soda, the liquid of which was dripping down the face of the computer, the small lights that signaled power and operations were dark. He grimaced and took a dirty paper towel, only partially smeared with marinara sauce, and mopped up what he could. When the computer was moderately dry he pushed the power button. Nothing happened. From behind him screams rose from the street.

He snorted. Fair treatment was an oxymoron when you lived in the docks. From the megacorps, anyway.

“No, no, shit no.” he muttered under his breath. The other right and left monitors were both read, no signal. He let out a groan, grabbed up his MOD.

he brushed the wet off its waterproof surface. At his touch it flicked on. Welcome Null, flashed across the round screen. He tapped it and the message was replaced by a dashboard. A series of numbers were displayed, fluctuating graph, a gyroscopic diagram, a cross section of a brain. He clicked the brain. It filled the screen. He zoomed in on the cerebellum, near his chip. He accessed it. He could have done cerebrally, but the added visual of the physical MOD was more concrete, it was less likely he’d miss something.

The screen of his MOD opened onto a dashboard of icons. The apps wrapped around the 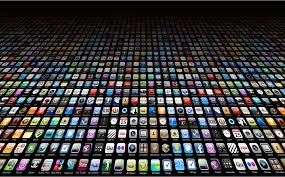 small screen in a spiral pattern. At the center were four icons. A flame, a rising sun, a brain and spinal cord, and a combined NA. H clicked on the flame. Welcome to FirePower, Null. Read the screen. Then it was replaced. At the top of his screen read Available Apps. A long list followed. None were grayed out. Null’s heart skipped. He exited the market place and checked clicked the rising sun icon of New Horizon. He found the same thing there. All apps were available. He checked the StemTek’s market. The same, he could download any app he wanted, free of charge. Null began to laugh. A hollow disbelieving laugh. He wasn’t surprised to find the same result in the NeroApp store either. He checked his data. The bar of available data was there, but there was no number for zettabytes he was limited to. The disbelieving laugh that came from his mouth sounded strange to his ears. Null sat down on the floor, uncaring of the shattered glass on his bed. Unconcerned, for once, that the screams and the herding of the crowd outside was unjust–that people were going to die. More people were going to do. That was for sure. But this time he’d be doing the killing.